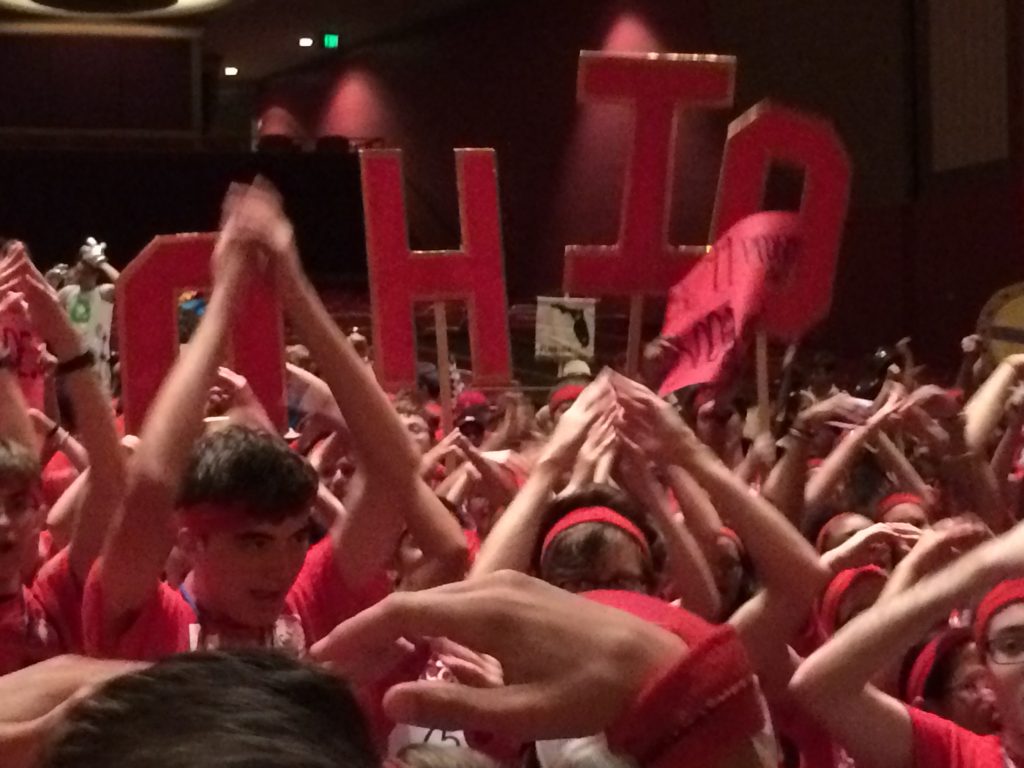 Main events of the day:

As is evident, all the days are packed with activities.  There is something for everyone.  And there are always new people to meet wherever you go.

There was a torrential downpour in the morning, right before the testing session, and so many students were completely soaked during the session.  Tullus said his shoes were filled with water within the first minute outside.  Hali and others discovered that trash bags make great rain gear – and are quite fashionable too.  A Shaker student (sorry, I did not get the name) claimed that the rain melted his convention program.  Rumor, on her swift and nimble wings, reported that Deucalion & Pyrrha were seen floating into the distance.  Rivers ran down the sidewalks.  The Nereids swam by and gazed at wonder at the buildings & trees.  Then the rain stopped, the sun later came out, and the humidity returned with a vengeance.

Mrs. I and I attended the lunch for State Chairs.  The locations for the next few conventions were announced:

Todd Wegenhard (Wyoming) and Brian Compton (Moeller) are the 2 convention chairs for the ’18 OH convention.  At fellowship, they asked for suggestions to improve the convention experience.  In spite of his divine status as ‘The Convention Chair,’ Todd admitted that he could not shorten the distances between activities, but also noted that he DID have the power to make ‘Babe’ one of the selections for movie night.  That’s one cute pig! 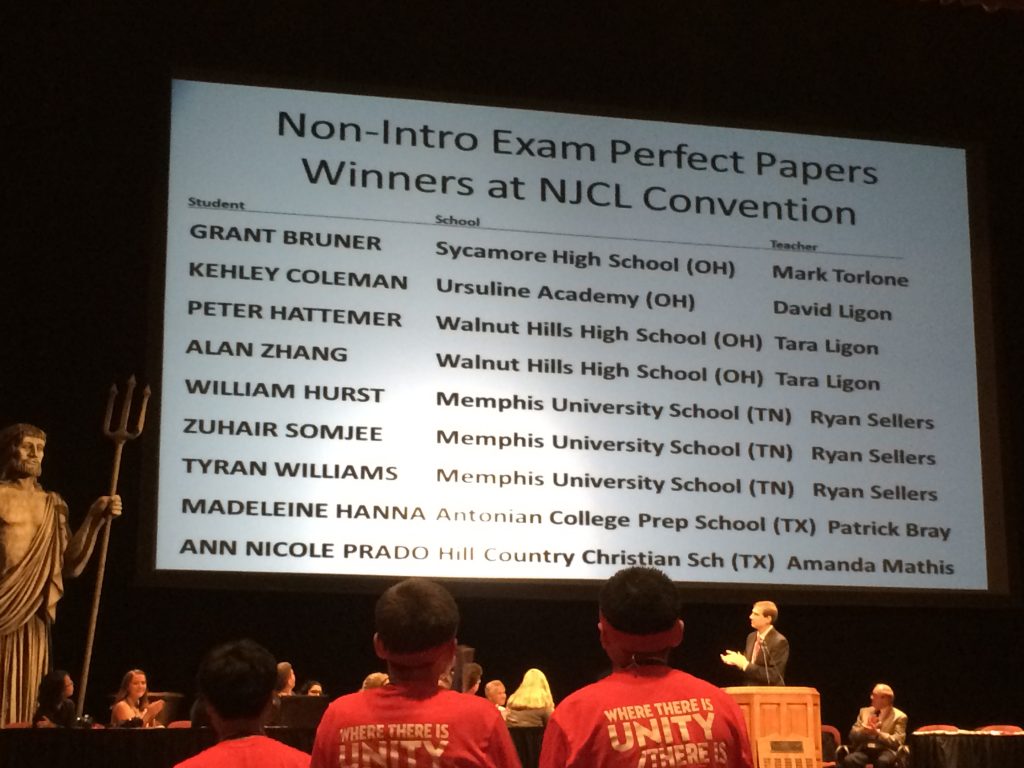 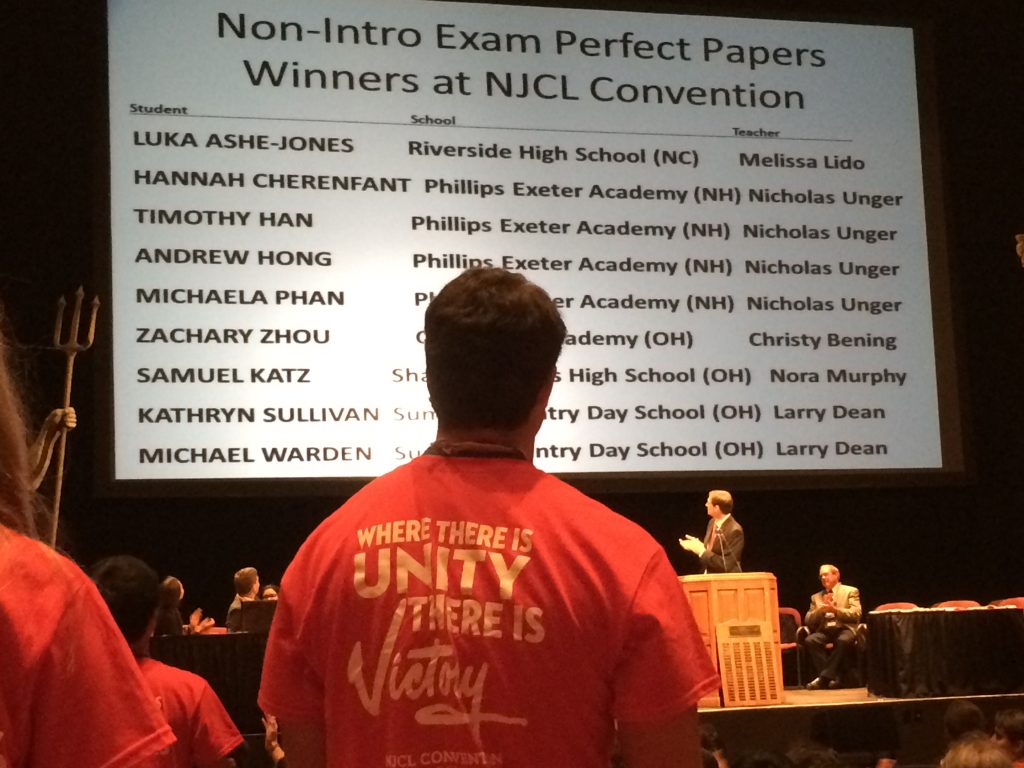 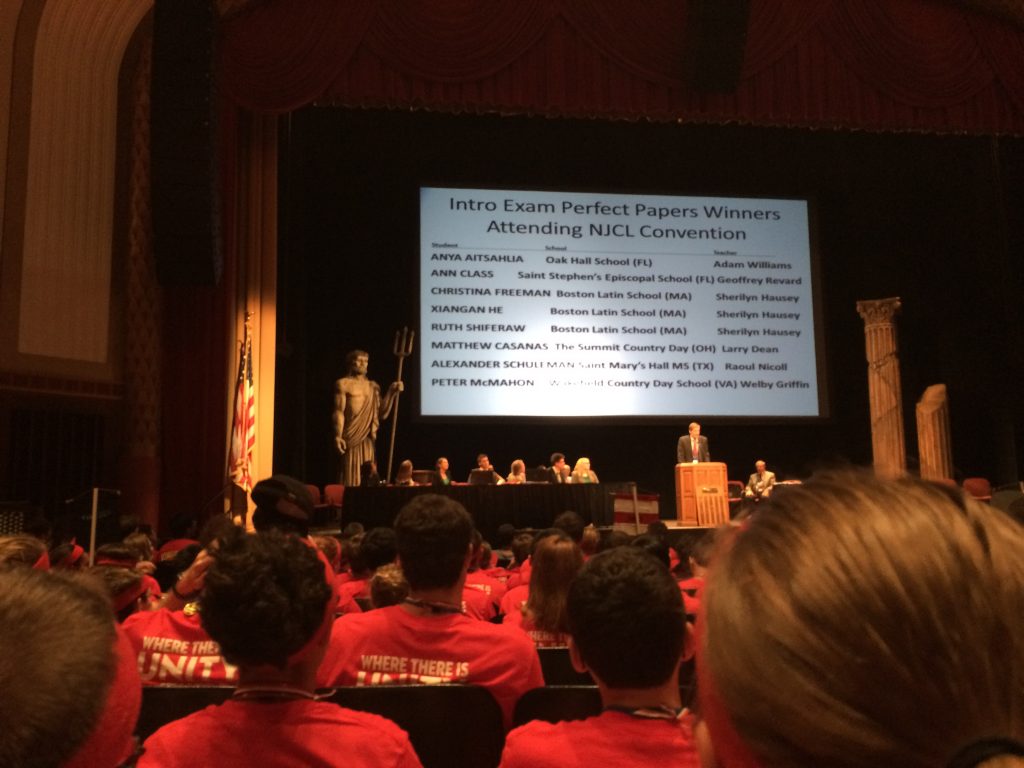 The Nominations Committee meeting determines the 2 candidates who will formally run for each office.  Sara Zandvakili (Indian Hill) was 1 of 4 candidates for the 2nd VP.  Each of them gave a short speech about qualifications and goals, and then the states voted for their 2 top candidates.  Sara recently had a mild concussion and therefore gave her speech with sunglasses on to minimize the light.  She did a terrific job and was selected to move forth to the general election!  Go SaraZ Go!

Round 1 of competitive certamen was today.  Rounds 2 & 3 are tomorrow.  Here are pix with the teams and players:

The advanced had a rather great round against Vermont and New Mexico.   They captured over 10 of the 20 toss-up questions and cruised to an easy victory with 180 pts.  Sam had a particularly strong round by nabbing a literature and language question in addition to his usual myth questions.

The intermediate was up against a tough GA team.  Alan and John each grabbed a toss-up and got points on the board for the team, and they managed to beat CA (Tullus emphasized this point at fellowship) to take 2nd place in the round.

The novice team is admittedly comprised of myth experts, which is not the best balance since half the questions are language based.  But the team not only got most of the myth questions but also correctly answered some history too.  And – what pleased me the most – all 4 of them answered a toss-up and have earned points at the national level. 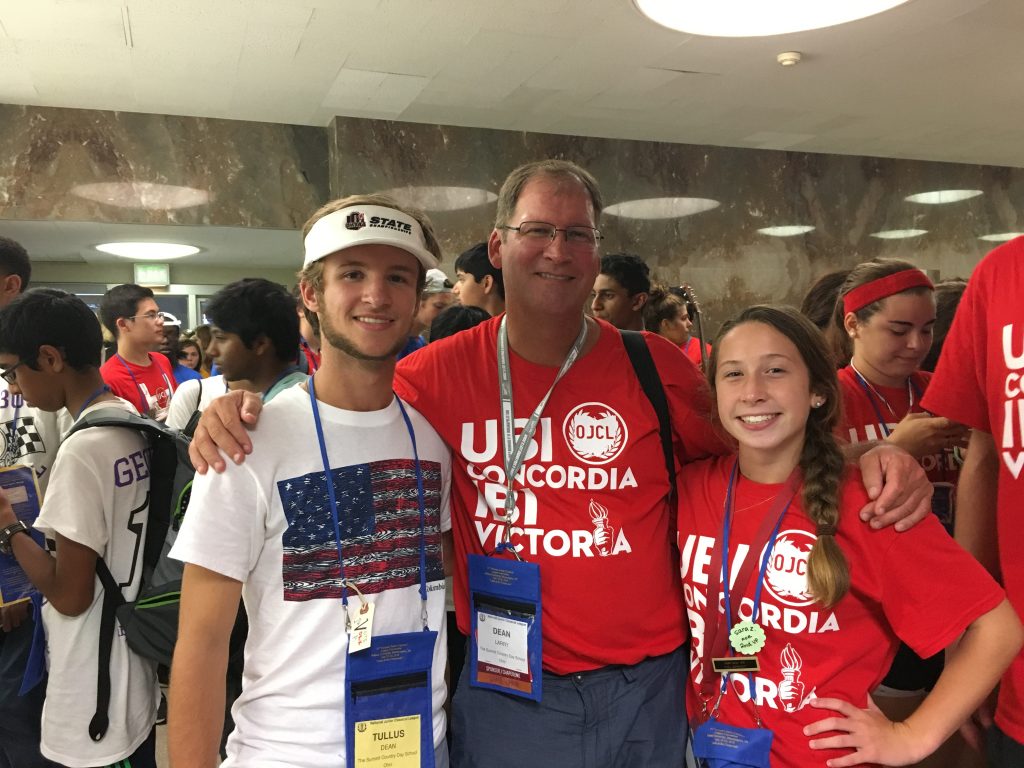 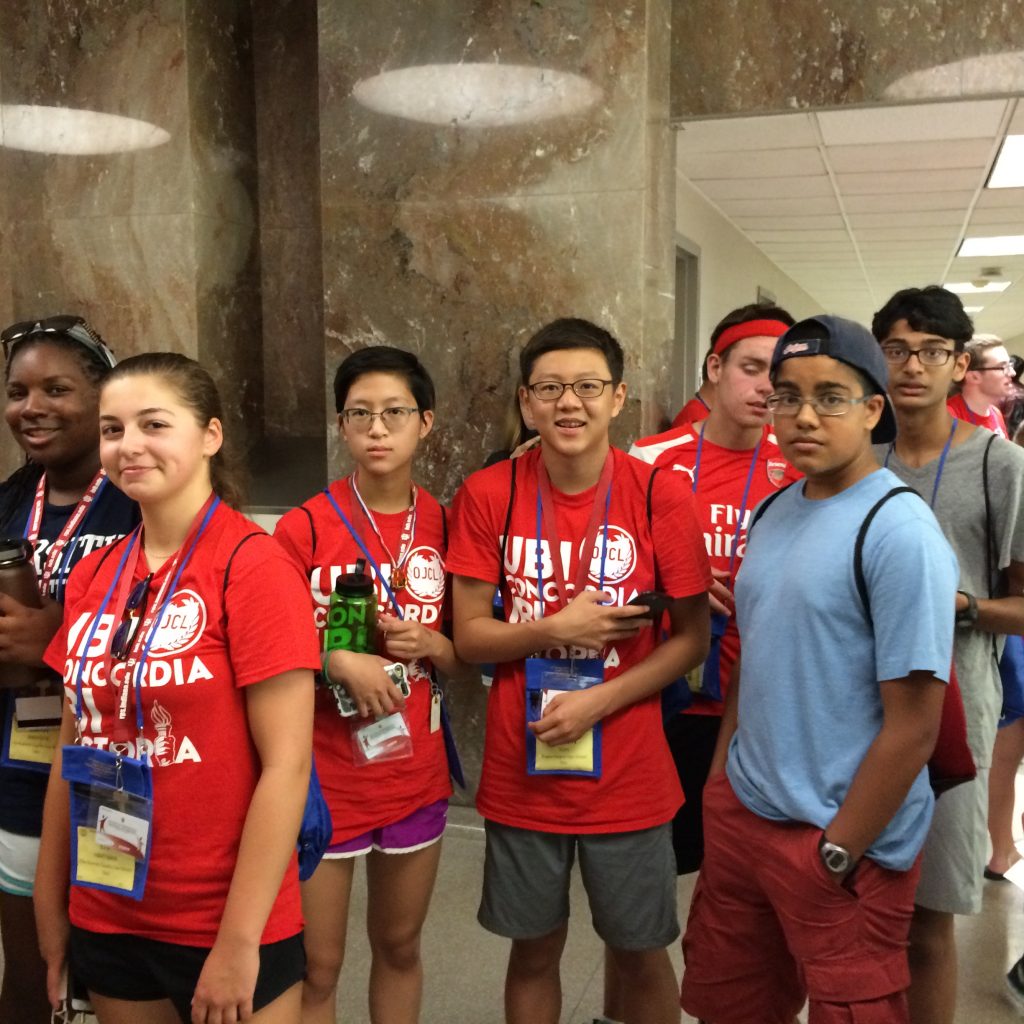 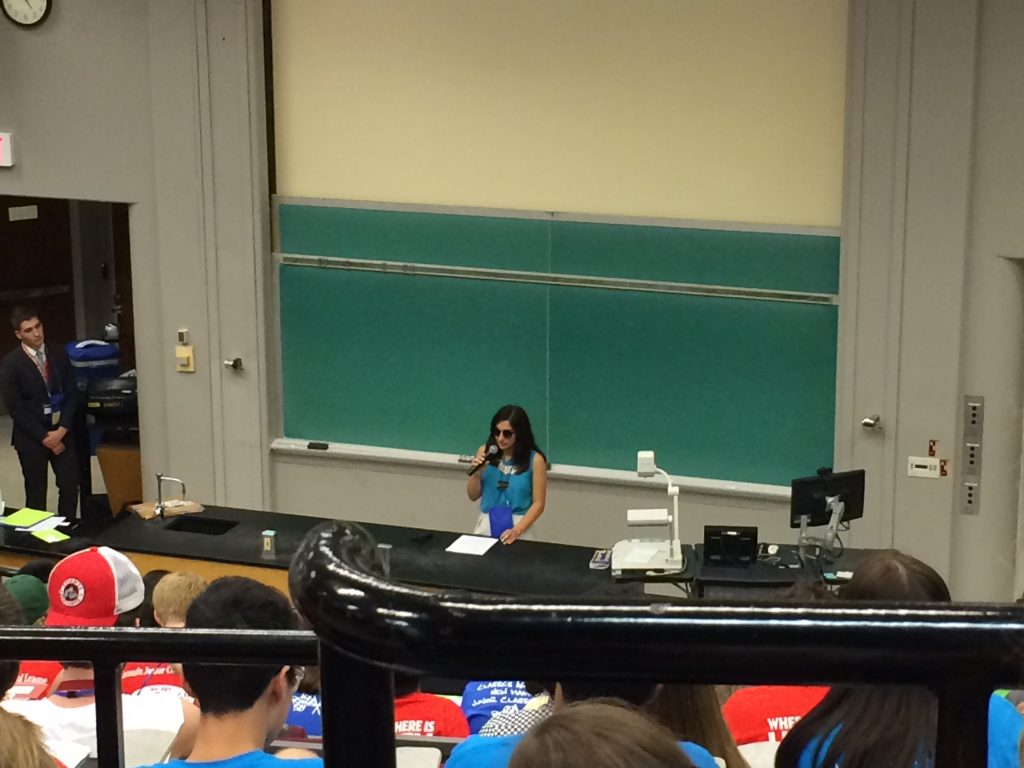 And, if you have come this far, I have news!  The ‘shave Tullus’ beard’ fund is very close to its goal!  Look below, Hannah has proof! 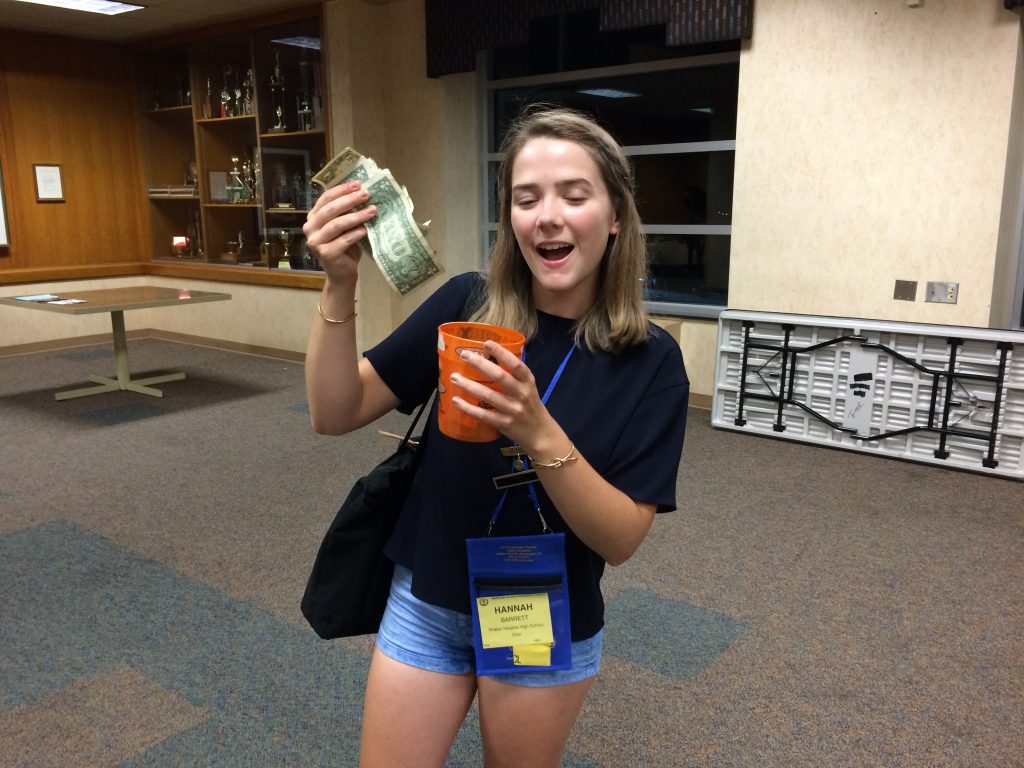