Click here for all the pix from the day

This morning was the calm before the storm.  I awoke at 7, then at 8, then at 9, and finally got out of bed at 10.  I needed it after our lengthy journey through (airport) Tartarus yesterday, but there will not be anymore late mornings this week.

NJCL 2015 officially started with the 1st General Assembly. There is 1 GA each day, and all are mandatory for the 1,600 participants at the convention.  There were speakers from Trinity, San Antonio, and the various classical organizations.  American Classical League President Kathy Elifrits tried to clear up confusion about the many different groups.  She explained that the ACL was the mother of the NJCL and NSCL, just as she was the mother of her daughter Amy, the most powerful woman at convention.  Seems pretty clear to me.  Thanks, Kathy!

What is the NJCL?  The National Junior Classical League is the organization that promotes the study of Latin and the Classics at the secondary level.  It includes 1,145 schools and 45,795 members.  In his speech to the GA, Alvin Dungan – the very 1st president of the NJCL in 1953! – noted that this makes the NJCL one of the largest youth organizations in the United States.  There are 57 schools with over 100 members (the ‘Century Clubs’), and 6 are from OH:  Indian Hill, Lakota East, Lakota West, Madeira, Summit, and Wyoming.  The largest club, Boston Latin School, has 320 members!

OH people have a long tradition of involvement in the NJCL.  Teachers Amy Alifrits (Lakota East) and Melissa Burgess (Indian Hill) are members of the Executive Committee which oversees the organization, and Todd Wegenhart (Wyoming) is in charge of the ACL Teaching Materials;  Maddie Briner (Univ. of Tenn.) is an officer in the NSCL, the college students who return year after year to help run the convention; Narayan Sundararajan (Shaker) is the 2nd VP of the NJCL; and Sherwin Little (formerly of Indian Hill) is the Administrator (the Sherwinator?) of the NJCL.  Yes, OH rox.

The college students assert they are ‘the Omniscient, Omnipotent, Omnipresent, Indispensable SCL.’  And it’s true, it’s true.  At the state convention, they run certamen and grade the academic tests.  At the national convention, they run all the athletic competitions and – most importantly – host the end of the week ‘That’s Entertaiment!’ talent and variety show.  NSCL President Kurt Ristroph (LSU) encouraged students to create new secret handshakes to demonstrate the symbiotic relationship between the Friendly Hand of the JCL and the Iron First of the SCL.  OH always a number of SCLers at convention.  I think the number this year is 10, and they are led by OSCL President Robert ‘Don’t Call Me Bobby Anymore’ McDonald (UC).

Jesse Campbell (Summit) was recognized during the GA for winning the Dennis Bartlow Award.   This honor covers the cost of transportation and convention.  go jesse go

After the GA, all the adults stayed for a meeting to discuss any problems (cold water for the showers was one thing) and to assign the various judging duties for the week.

Certamen orientation was at 4:30.  3 prelims for everyone, semis for 9 teams, finals for 3 teams.  1st round is tomorrow evening, more on the teams then.

I was one of the chaperones for the dance tonight.  Everyone had to take off their shoes b/c the university was worried about the floor (it was in a gym).  Free glow sticks.  I saw Troy and Tullus and Aquila and Hannah and Katerina and Tino and Jesse. 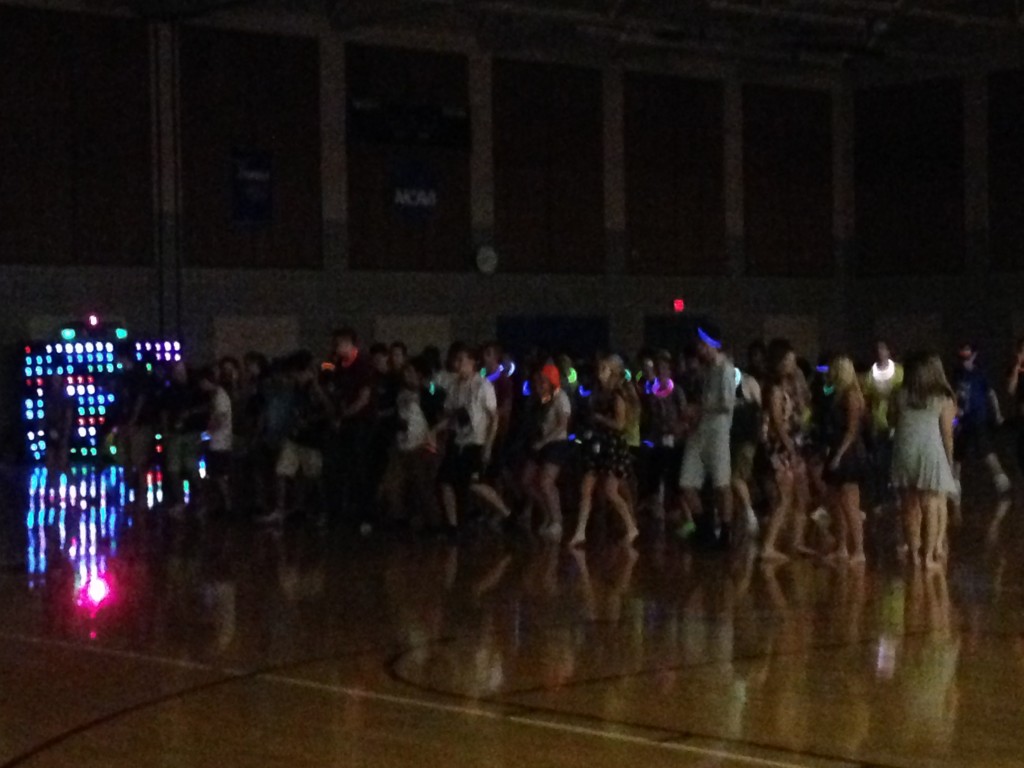 The state t-shirts were handed out at the 10:45 pm fellowship – Cactus Makes Perfect!  Check out some pix of the Exec Board members in attendance here at NJCL: 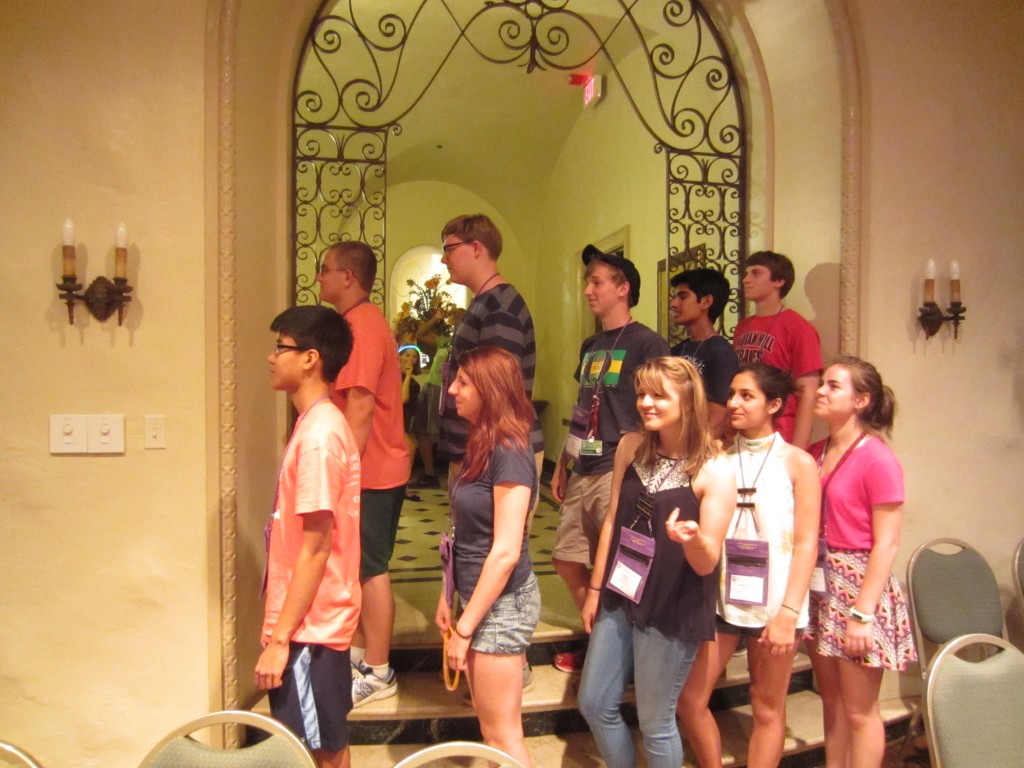 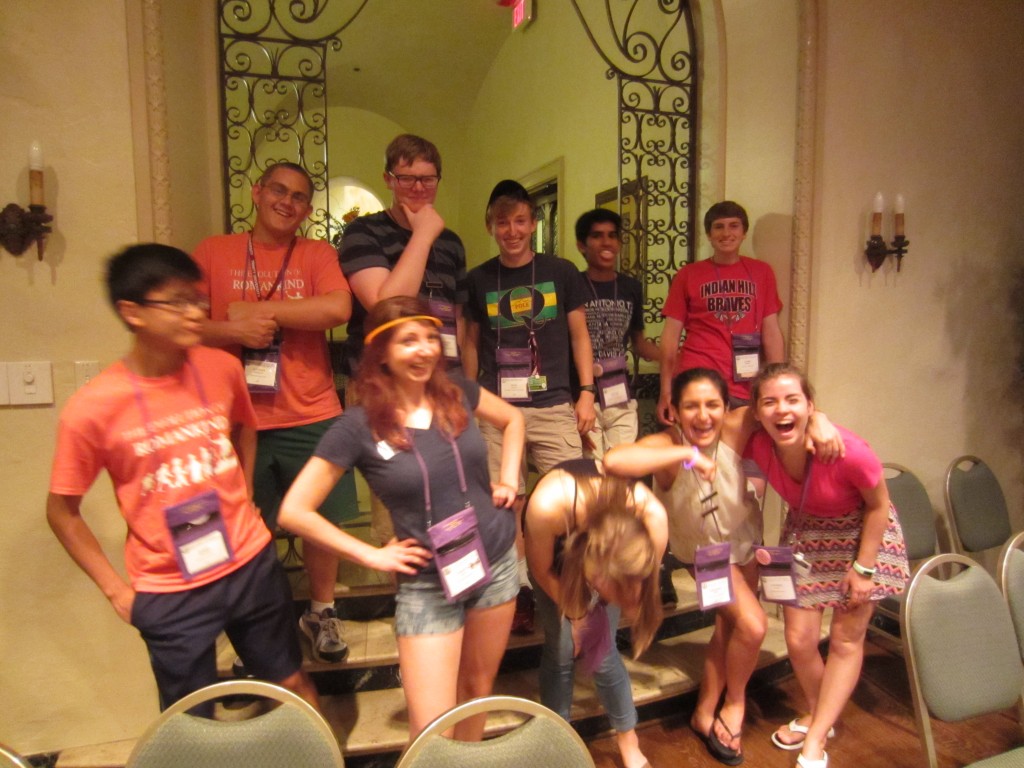 Kelly leads the OH delegation through a practice cheer.

Random quote by Dustin from Summit:  ‘GAs are the only things that are mandatory this week.’ [This is NOT true.]